I like Marty Schwartz and his trading book "Pit Bull" a lot. It is an honest book about a trader who had his ups and downs in the market as we all do. In his book he writes, he made his highest progress, when he stopped trying "to be right" with the trades and instead followed the approach of "making money".

Here is what I found on Wikipedia about him:

Martin S. Schwartz (Buzzy, born March 23, 1945) is a Wall Street trader who made his fortune successfully trading stocks, futures and options. He received national attention when he won the U.S. Investing Championship in 1984. Schwartz is the author of Pit Bull: Lessons from Wall Street's Champion Day Trader. 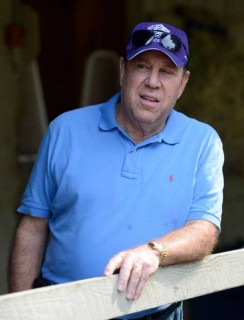 These are some of Marty's Golden Rules I found on the Internet:

1) "I try not to go against the moving averages; it is self-destructive."

Marty Schwartz uses a 10-period exponential moving average (Ema) to distinguish between bullish and bearish scenarios and as a filter. Whenever price is above the 10 period EMA he looks for buy trades and when price is below the 10 period Ema, he is looking for short opportunities.

This approach and rules can be especially helpful when used as a filter criteria. For example, a trader could use a 10 period Ema on the daily or weekly time-frame to determine the direction of his trades. Then he can go to the lower time-frames where he executes his trades and only looks for trades in the direction which the Ema suggests.

This is a rule I am using often for my own trading approach.

2) "Before putting on a position always ask, 'Do I really want to have this position?"

Interesting and very helpful advice. Just waiting a few moments, reflecting what you are about to do and whether it is really what you should be doing, can help you stay out of bad trades.

3) "My biggest losses have always followed my largest profits."

During a winning streak, many traders become too confident, believe that they suddenly can't fail anymore and that they have a gut feeling for what is going to happen.

This is something that happens all of us I would guess. Feeling "indestructible" like Superman in the markets. Very dangerous, because the next you remember is giving all (and often more) profits back to the market.

4) Your greatest enemy as a trader

"Most people think that they're playing against the market, but the market doesn't care. You're really playing against yourself. You have to stop trying to will things to happen in order to prove that you're right. Listen only to what the market is telling you now. Forget what you thought it was telling you five minutes ago. The sole objective of trading is not to prove you're right, but to hear the cash register ring."

Well, I think it says it all!

5) Use a checklist and a trading plan

"I review my checklist. It's a handwritten sheet laminated in plastic and taped to the right-hand corner of my desk where I can't overlook it."

"If you have a game plan prepared ahead of time, it can help you find courage in the heat of the battle."

After reading Marty's book, I prepared a little plastic card for myself. And guess what, it helped me a lot especially during difficult times.

6) "Bottom fishing is one of the most expensive forms of gambling."

This is interesting because it sounds very much the opposite of what Paul Tudor Jones is telling us when he say's that the best money can be made on turning points. Well, not really because also Jones believes in the major trend. I think that Jones is looking for major trend direction and then for some pull-backs on smaller time frames and the right turning point into the direction of the main trend. To me, this would make a lot of sense.

7) "Before taking a position, always know the amount you are willing to lose."

Important. Important. Important. Many newbies focus manly on the money they can make but it should be the primary approach to figure out how much money one can lose. If we then look for trading opportunities with a good win/loss ratio we are already on a good way.

Professional market participants have a good idea about where the orders are placed in the market. Try to avoid these levels with our own trading will help us not to get kicked out of the trade so often.

Martin Schwartz is a very disciplined trader with a strong work ethic. It is interesting to read how a typical trading day looked as he was trading in the pits.

As I wrote above, I would recommend his book to all traders.