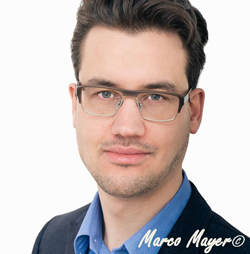 Marco Mayer started trading in 1999, at the age of nineteen, by placing his first trades in the German stock markets. A few years later he started to actively trade futures in the U.S. and European markets.

After years of failing to make money trading with all the commonly taught methods, like technical analysis, candlestick-patterns, and the standard indicators, his understanding of the markets turned upside down when Marco met Joe Ross in 2005. After receiving extensive personal training from Joe, he started to approach the markets in the right ways, and his trading finally became successful.

In 2008, when Joe recognized Marco’s exceptional talent and success as a trader, he invited Marco to join him as a teacher at Trading Educators. Since then, Joe’s teachings have been a huge inspiration for Marco, especially in tough trading times.

Before becoming a full-time trader, Marco worked as a professional in financial information technology for over fifteen years. This allowed him to see in detail what's actually going on behind the "black boxes" of the electronic markets, how trading works on an institutional level, what tools and techniques are used, and how they’re applied in the professional world.

With his strong IT-background in financial software development, it was logical that he soon started to develop and test his trading ideas and systems using his skills as a software developer. He quickly realized that systematic trading is the kind of trading that would really work for him long-term, and where he felt the most comfortable. From there on he focused on systematic trading, and since then has never looked back!

Currently, Marco uses his own proprietary backtesting and automated trading solutions that allow him to go into depths of quantitative trading and risk-management models that are beyond the limits of the available retail backtesting software packages.

Most of his trading nowadays occurs by running his own trading systems in a diverse universe of markets around the globe, with a strong focus on currencies.

Marco not only loves to trade, but has also discovered his passion for teaching and helping others to become successful traders, especially since he’s well aware, from his own experience, how crucial it is to have professional support from a real trader who himself has gone down the tough road to successful trading. Thanks to his being able to automate most of his trading, Marco is freed up to be an active teacher and mentor at Trading Educators.

You will often find him helping others as a moderator in our Trading Educator's trading forums, posting on our blog, releasing videos, and writing articles. He is also the creator of the Ambush Trading Method™, which was first released in 2009.

Invest in yourself and visit Marco's private mentoring page!