Whenever the Federal Open Market Committee meets and releases its rate decision and its statement, it’s seen as one of the most important data releases in the markets in the currency markets. And it is, as sometimes there’s a real surprise that can have a huge impact on the markets.

Because of that the whole FX world goes crazy days before it and waits for the statement in anticipation of big moves in the markets. But actually most of the time these don’t happen as there is no big surprise in what the FOMC has to tell. Well yes the markets almost always go crazy a few minutes before and after the statement is released but that’s more due to the lack of liquidity in the markets. Which is why it’s a good idea for most day traders to stay out of the markets around the release time and also shortly before the release due to a lack of both, liquidity and volatility.

Enough of the talk, let’s look at some stats! How do we get an idea about what happens on FOMC days? We simply get the dates (http://www.federalreserve.gov/monetarypolicy/fomccalendars.htm) of the all FOMC dates of the last 11 years, have a look at each of these days and compare them to non-FOMC days. That gives us 90 FOMC days we can look at.

Here’s the distribution of how many times the ATR the EUR/USD for example moves (open to close) on FOMC days: 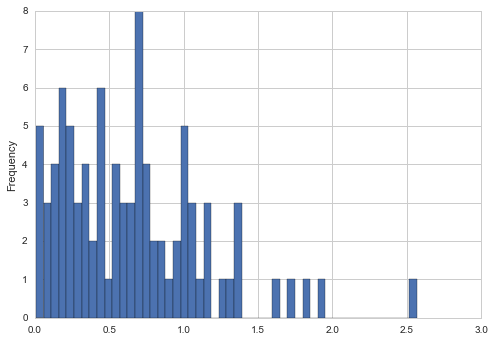 Now we have some outliers here with 22 days of EUR/USD moving more than 1 time the ATR, which is 24% of FOMC days. But on average EUR/USD moved just 0.66 times the ATR on these days.

Compared to non-FOMC days where we have 12% of days moving more than 1 time the ATR and an average of 0.49 times the ATR movements it’s true that at least EUR/USD tends to move more on FOMC days than usual. The same is true for most other currencies related to the USD, but not so much for the crosses.

But this also shows us that most of the time it’s not that crazy. Yes, it’s 30% more action than usual and chances to get a move of more than 1 time the ATR are twice as high as on non-FOMC days. But still that only happened on one out of four FOMC days.

So don’t believe the hype and get too crazy on FOMC days, at the end of the day they’re not THAT different from any other day…unless the FED comes up with something unexpected ;)