One of the hottest topics right now is the ongoing US election and how it will affect the currency markets. If we take Trump by his words, there’s no surprise two currencies should definitely be affected strongly by a winning Trump, the Mexican Peso (MXN due to his plan to build a wall between the US an Mexico) and the Russian Ruble (RUB as Trump wants to get closer to Russia).

Therefor the ultimate Trump-Trade is said to be RUB/MXN. Let’s check if that’s actually the case. 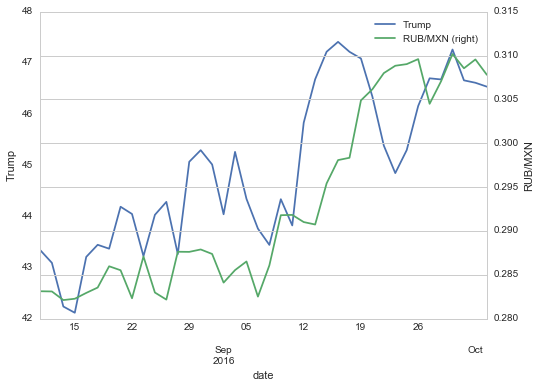 Looking at the chart we can already see that there obviously is a correlation going on between the election polls and RUB/MXN. Looking at the stats, I get a correlation coefficient of about 0.8 between the polls results and the RUB/MXN quote for this time period which is confirming our observation. I didn’t really dive into the election poll data so I’m for example not sure at what time of the day they’re actually available. So it could be I’d actually need to shift the election data forward one day or half a day etc. But for the sake of this article which is to have a look at synthetic FX pairs I guess it’s all fine.

Now if you’d like to trade this and want to go long RUB/MXN because you believe in the correlation and think Trump will win you might run into an issue. RUB/MXN is probably not on your brokers list of FX pairs. What to do, what to do?! Build your own!

Going long 100k units EUR/GBP for example is nothing else than buying 100k of EUR and selling 100k of GBP against the USD. The opposite is true if you want to go short EUR/GBP, you sell 100k of EUR/USD and buy 100k of GBPUSD.

Now for most retail traders this wouldn’t make much sense as the spread usually will be smaller trading EUR/GBP directly which is available at every broker. This way you’ll also pay less commissions and will of course need less margin since you put only one, not two trades on.

For institutions or traders who trade more complex FX portfolios things might look different, but for most of us trading synthetic pairs makes no sense unless we have to.

One exception I’d like to mention is if you want to trade a cross with a different ratio. Why would you want to do that? Because if you trade a cross with a different ratio of 1.2/1 for example you get a slightly different price curve that for example might be more likely to show mean-reverting behavior than trading it 1:1. You can go even further with this by including more than two currencies. But that’s maybe a topic for another article, let’s go back to RUB/MXN!

So we want to trade RUB/MXN synthetically as our brokers doesn’t offer it as a cross. This means trading USD/RUB and USD/MXN separately.

The opposite is true if we want to go short RUB/MXN, we have to sell RUB, so we buy USD/RUB. And we want to buy MXN, so we sell USD/MXN.

That’s really all there is to it! Some might wonder if I have or plan to put any fundamental trades on regarding the election. And the answer is no. I’ll just stick to trading my AlgoStrats:FX systems as usual.

More posts from author
Thursday, 11 June 2020 5 Tips on How to Deal with Drawdowns
Thursday, 30 April 2020 How much to risk per trade
Thursday, 23 April 2020 Some people seem to like to lose, so they win by losing money

Time to sell the JPY?

Genesis Trade Navigator FX Data issues and how to fix them