Draghi Day - EUR/USD To trade or not to trade?

Today we had the long awaited ECB press conference and Draghi did his thing by surprising traders with their decisions. 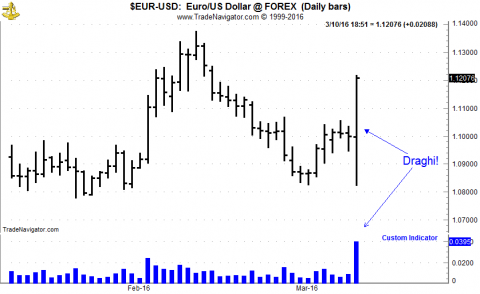 This is what happened so far (13:00 NY Time) and as you can see the volatility hasn't been that high for weeks with EUR/USD moving 400 pips intraday.

So what to do on such a day where you can expect higher volatility than usual? Take trades or not?

For me it's a no-brainer. As a systematic trader, I trade each system as I backtested it. Did I exclude trades on ECB days on my backtest? Yes or No. If No, which is the case for me, since results have been better to include such days, I'll trade as usual. And looking at the statistics, it's often days like today when the big money is made (ECB days, NFP days etc.), and missing out on these trades could be disastrous!

That's one of the big advantages of trading systematic. You don't have to stress yourself out with making such decisions. And it's hard to exaggerate how much easier that made my life as a trader! I didn't even watch the markets when the party started and was instead having a nice walk on a sunny day in Berlin.

Of course this might not be true for your strategy and trading style at all. If you trade very short-term for example, it might make a lot of sense to not trade shortly before, during and shortly after the release. Simply because you might suffer from the bad liquidity in the markets or the stops you usually use won't make much sense in such a highly volatile market.

So where's the EUR/USD going? I have no idea, but most of the time you'll see some kind of a correction after such a move on the next 1-2 days. And looking at my systems right now I might end up short the EUR/USD tomorrow. But the day is still not over!