Drawdown is the norm, not the exception

When I started out trading I had the illusion that being a successful trader meant to no longer have drawdowns or at least on very rare occasions. And I think most traders start out with that idea in their mind even though they don’t understand what it actually means.

In Trading, you are in a Drawdown anytime you don’t make new equity highs on your account, or if you have multiple accounts across all of your accounts. That’s not nice and so any trader tries to minimize these times as making new equity highs is a lot more fun than not doing so.

The problem is that if you try too hard to get rid of Drawdowns you usually get the opposite. Usually that’s when you’re starting out as a trader and still have the illusion that it’s somehow possible to avoid drawdowns all together. You end up looking for strategies and ways of trading where you hardly ever have to take a loss. These can for example be martingale strategies, or strategies where you have very small profit targets in relation to your stop-loss (if you have one). These can easily work out for a couple of months, if you’re lucky even longer but at some point you’ll have a drawdown your account won’t recover from. Or you fall for that trading robot ad showing you an equity curve that goes up in a perfect 45 degree angle promising you 99% profits. If you want to know how to build one of these, stay tuned as I’m planning to do a small video showing you how to do it in one of my new videos, soon.

Back in reality, let’s have a look at why it’s the norm not the exception to be in a drawdown as a trader. Here’s the equity curve of trading the Ambush All Stars small portfolio (see this page for more details): 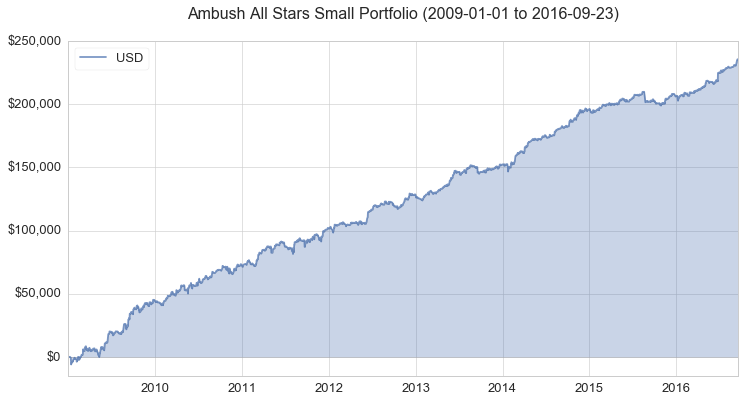 Looks really good doesn’t it? If you think it doesn’t, you might still be looking for that holy grail, so be careful out there!

Still, looking at the stats we’ve been making new equity highs only about 15% of the time. That means 85% of the time the portfolio was in a Drawdown.

And that’s nothing unusual, you will find about the same numbers on most good strategies if you look at it over multiple years of trading. In the short term of course this can look different. During the last 6 months for example, the strategy made new equity highs 44% of the time! But unfortunately that’s the exception, not the norm.

Sounds terrible? Actually I don’t think so. On the contrary it’s a finding you might want to celebrate if you’ve been going all crazy during drawdowns in the past. They’re no problem and if you’re in a drawdown most of the time it doesn’t mean you’re a bad trader or your strategy isn’t working. It simply is the norm of successful trading in the long run, not the exception!

Just coming back from vacation where we’ve been doing a lot of hiking in the mountains, here’s an analogy. You’re standing on a peak of a mountain looking at an even higher peak. But to get there you first have to go down that small valley…no way around it!

It's the same in trading, so as long as the size of the drawdown is within your expectations, you can and should relax when you’re in a drawdown. It's just a necessity you have to endure to get those profits. So understanding and accepting Drawdowns as part of this business will make your life as a trader much easier!

Having said that drawdowns are still making me uncomfortable. I don't like them at all and each time I'm in a big one I'm having the same doubts and troubles most of you probably have too. But knowing that actually nothing is wrong helps a lot to make it through these times. Without that knowledge and understanding, you not only have the doubts but you allow them to win over, follow them and then probably stop trading at the worst time possible.